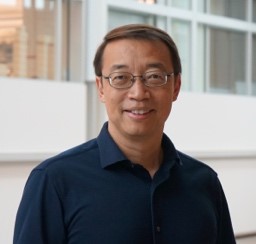 Imaging Deeper and Faster: Watching the Brain in Action with Ultrafast Lasers
Brain research is a multi-disciplinary endeavor, and inspires the development of innovative measurement tools. Multiphoton microscopy is the go-to technique for high spatial resolution, deep imaging in scattering biological tissue, and relies heavily on the new development of ultrafast lasers that deliver high pulse energy, flexible repetition rate, and wide wavelength coverage. By pushing the boundaries of imaging depth and speed, multiphoton microscopy enables large-scale, non-invasive monitoring of brain activity in live animals, and is poised to play a major role in understanding how brains work.

Professor Chris Xu is the founding co-director of Cornell Neurotech, and the director of Cornell NeuroNex Hub, an NSF funded center for developing and disseminating neurotechnology. Prior to Cornell, he was a member of technical staff at Bell Laboratories, and pioneered breakthrough development of fiber optic communication systems. He received his Ph.D. in Applied Physics from Cornell University, and contributed to the early development of 2-photon microscopy. His current research areas are biomedical imaging and fiber optics, with major thrusts in multiphoton microscopy for deep brain imaging, multiphoton microendoscopy for clinical applications, and fiber-based devices and systems for telecommunications and optical imaging.
His research is supported by major grants from NIH, NSF, DARPA, and IARPA. Dr. Xu has chaired or served on numerous conference organization committees and NSF/NIH review panels. In addition to hundreds of journal and conference papers, he has 32 patents granted or pending. He has won the NSF CAREER award, Bell Labs team research award, the Tau Beta Pi Professor of the Year Award, and two teaching excellence awards from Cornell Engineering College. He received the 2017 Cornell Engineering Research Excellence Award. He is a fellow of the Optical Society of America, and a fellow of the National Academy of Inventors.